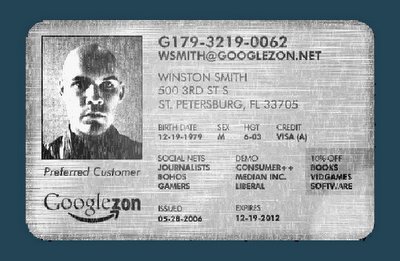 Here is a link to an 8 minute flash video called Epic 2014 which is picking up new steam on the little old internet (originally released in early 2004). The piece is a mock futuristic news flash foretelling the death of "real journalism." It was created by young journalists Matt Thompson and Robin Sloan and I don’t like it. It just feels sooo much like propaganda. A gloom and doom projection of a future where “real” journalism is lost, driven bankrupt by a sensational, technological monster with no respect for institutions like The New York Times.

Move over RIAA. File sharing may destroy the music industry, but INTERNET NEWS threatens our VERY DEMOCRACY! It is true though. The internet makes “journalism” so accessible that soon nearly EVERYONE will have a voice and where is the democracy in that?!

Check this out. This is the second to last voiceover bit from vid.

"But at it’s worst, and for too many, EPIC is merely a collection of trivia. Much of it untrue, all of it narrow, shallow and sensational. But EPIC is what we wanted, it is what we chose, and it’s commercial success preempted any discussions of media and democracy for journalistic ethics."

"Today I learned that as far as information on the web is concerned it is "all of it narrow, shallow and sensational."”

"Oh really where did you learn that?"

From the handful of articles I read it appears journalist are calling the movie “chilling” and “a disturbing picture of a time that might be." To me it feels like a bit of flashy advertising. I do however think it is cute that its makers believe The New York Times will last till 2014. :)
Posted by Dave Himself at 10:58 PM

Very funny, and all too true. Thanks for popping by. You might consider putting a link to our blog on yours, your blog will then appear automatically in the "Blogs we read and that link here" section of our sidebar.

I'd cetainly stop over from time to time. Good attitude on the msmedia!

I think that this piece packs more entertaining sci fi into 8 minutes than most filmmakers can in 3 hours. It's right on the money as far as how news is already disseminated (Google News) and it's 'far reaching' thesis about robots stripping news headlines from the Times is hilarious. It's less 1984 meets 2014 than Roombah meets Hoover.