Shake's On A Plane (Or Aqua Teen Hunger Farce)

If you don’t think that these are hysterical then you either are not aware of the soon to come Snakes On A Plane with Samuel L. Jackson or... You are unfamiliar with Aqua Teen Hunger Force which is inexcusable since I told you to watch it over a year ago (June 27th, 2005.) Anyway, they're funny and I wasted way too much time making them... so laugh dammit.

UPDATE: I neglected to mention there actually is an Aqua Teen Hunger Force movie on its way. Read about it here.

The Warriors Finally Make It To Coney 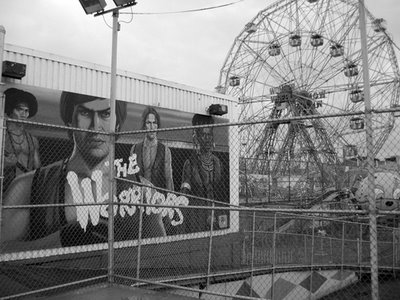 There is a free showing of The Warriors coming up at Coney Island.

When: Wednesday, August 2nd at 8:30 PM
Where: Asser Levy Park amphitheater
between Sea Breeze and Ocean at 2nd street
Coney Island, NY
Why: Because event sponsors ‘NetFlix’ apparently never heard about the violence that erupted outside of dozens of theatres when the movie opened in 1979. What's going to happen when we get there with our blankets and there isn't enough room... and we start fighting for ten square feet of ground, our turf, our little piece of turf. That's crap, brothers!

Oh and get this... There is a subway based scavenger hunt “traversing all five boroughs” before hand.

Grand Prize: Nine leather "Warriors" vests, and an August 3rd brunch with the cast and crew of The Warriors!

Little Fish In A Big LogoPond

There is a fairly new site on the web called logopond. It is an “identity inspiration” site. Their slogan is “A place to fish for ideas” get it? It's a collection of logos which designers (and from the looks of it wannabe designers) have created. You go there to get/steal ideas. After Digg.com pointed it out to me (and of course crashed it... see Digg Effect) I got right down to making a logo that would hopefully be well received there. And in fact they put the RAYSHIO logo I made (seen above) right on the front page... which was nice. It is just an imaginary company that might offer downloadable audio books. It would be pronounced 'Ray-shee-oh' (like ratio.) Anyway, since the purpose of this post is simply to toot my own horn I won't waste any more of your time... BEEP BEEP. Check out logopond if you like logos. The site is a work in progress but its quite nice so far.
Posted by Dave Himself at 3:25 PM No comments: 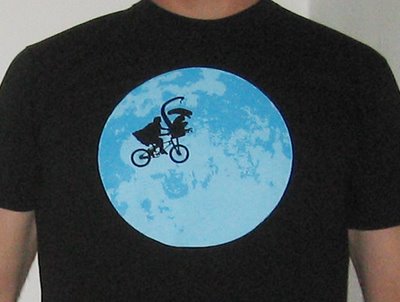 Remember Go Ape Shirts? The site brave enough to take a chance on Boo Boo Walker (formerly known as At At Boo Boo.) We’ll it looks like folks are going ape for yet another winner. Elliot’s New Friend! Yes indeed, another gem orphaned by Threadless.com and rescued by Go Ape.

Thank you Preshrunk for breaking the story on this one.
Posted by Dave Himself at 8:02 PM 3 comments: 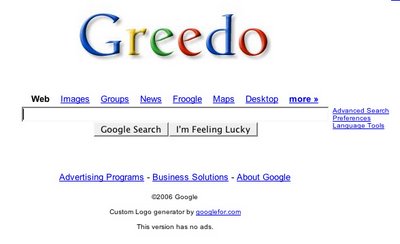 Genericide: The process by which trademark rights are diminished or lost as a result of common use in the marketplace is sometimes known as genericide. (e.g. Kleenex and Popsicle) You know your brand has truly met this definition when Merriam Webster bitch slaps your capital "G" down to lowercase and informs you that you are now a verb.

In the interest of further watering down the Google brand (which I love dearly) get your own custom Google home page (like the one pictured above) at customgoogle.
Posted by Dave Himself at 3:34 AM No comments: 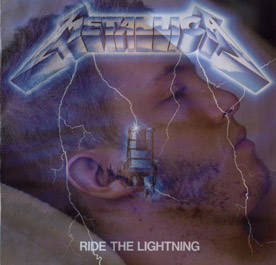 Castle Rock - Jason Bunch was listening to Metallica on his iPod while mowing the lawn outside his Castle Rock home Sunday afternoon when lightning hit him.

Says the Denver post. The story goes on to say “The wounds follow the line of his iPod, from his ears down his right side to his hip, where he was carrying the device. The iPod has a hole in the back.” So the back of the iPod was blown out, destroyed by a lightning strike.

When reached for comment the RIAA made this quote available:

“What you have seen is only a sample of our power. We demand the halt of all illegal downloading of music on the internet or we will be forced to show the world the full extent of our power.”
Posted by Dave Himself at 2:33 PM No comments: